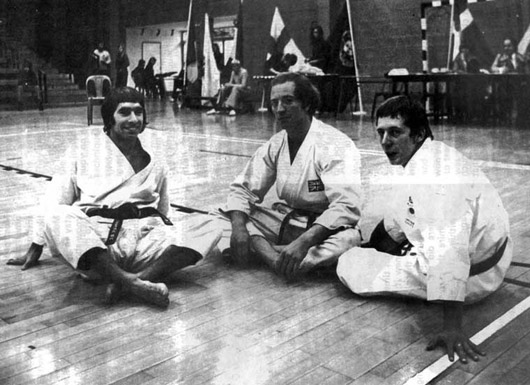 Q: Dave, how old were you when you started karate?
I was seventeen when I started karate but I’d been practising judo for three years before that. I started at the Blackfriars dojo in London with Enoeda sensei. I was interested in fighting.

Q: Who were the early influences in your training?
Obviously Enoeda sensei as he was the chief instructor of the dojo, but also to a great extent, Kato sensei, who helped me through the early kyu grades. At this time, sensei Ray Fuller was secretary and ran the dojo, he helped with a great deal of advice and inspiration.

Q: How often did you train and what was stressed?
At the start three times a week, twice at the Blackfriars dojo and once at the Budokwai also in London. The training at this time was hard traditional basics with not a great deal of explanation but a lot of repetition.

Q: Did you do much extra training on your own at home?
Yes, a little when I had time at work, there was a room that I could use with a mirror. I used to practice the techniques that were taught and the body positions.

Q: Do you think karate training methods have changed much since you started?
Yes, a great deal, there is much more explanation and understanding, now students learn much more at an early stage. This is due, I think, to the Japanese getting over the language barrier, and also the students they taught at the start being able to express themselves in their own language.

Q: You were for many years an International kumite and kata competitor for the KUGB, winning many events. What made you stop competing?
I had been competing for eight years at quite a pace, and wanted to develop and progress the other aspects of karate.

Q: Who impressed you most in your competition days?

Q: How does the sport aspect compare now to your time?

It has changed a great deal. It was much cruder when I was fighting, though that may not be the right word for it. You see, two people would go onto the square with one or two techniques that worked for them, then try to hit each other as hard and as fast as possible. Now there is more thought involved, it’s a skilled craft
now with tactics learned at an early stage. Also the range of techniques have changed, they are much more varied and geared towards competition.

Q: Most people know that you spent some time training on the infamous JKA Instructors Class in Tokyo. What was that like?

Much has been written already about my stay in Japan. As you say, most people know about it. Unless you want me to go into more detail, all I’ll say is that it was very rewarding in all aspects of karate-do and very, very hard!

Q: Why did you decide to leave the KUGB?

I never decided to leave the KUGB, it just evolved over a period of time. When I returned from Japan I decided not to compete again so I was not seen so much by people outside where I was training. Then after about a year I decided to start teaching and taking up offers from club instructors to visit their dojo’s. These clubs were from many different styles and associations. I was only teaching Shotokan as I know little of anything else, but they were keen to have me, so I went. During this time my KUGB license ran out and I didn’t renew it, not for any real reason. It’s just that I wasn’t involved with anything the KUGB was doing, so there did not seem much point. I still admire the KUGB and many people within it. If it were not for Enoeda sensei and the KUGB, I would not have been, seen and done many of the things that I treasure in my life so far.

Q: You have a very unique way of teaching your brand of Shotokan karate having trained with you on courses. How did you develop this style?

Well, I don’t think it’s very unique and I haven’t tried to develop any way of teaching. I teach as I have been taught. I have picked up many things from different senseis but I think it’s nothing new or different.

Q: What does your own training programme consist of?

It would take a week to write my training programme John, it’s quite varied so could we leave this one.

Q: You are a tremendous kicker, yet you say that you are not at all supple. So how is it done?

By using the right ingredients of the technique at the right time. It’s very hard to explain in writing but I’ll try. Say you have two cooks, both with the same ingredients to make a cake. They also mix the ingredients in the same order. What will make one better than the other? Well, it’s the ‘timing’ in which the ingredients are mixed. It’s important to first understand the technique throughout and not just the start and finished product. Then you must understand your own body, what limitations it has, and how best it works, then you can start to mix your cake. This may be difficult to understand without showing an example, but I hope the reader can get some idea of what I mean.

Q: What is the most important aspect of your own training?

I can’t say that there is one aspect more important than any other. I try to keep an even balance over a period of time. I think it is wrong to have one area of your karate stronger than the rest. I think you should try and grow so your karate is rounded and developed evenly.

Q: How did your involvement come about with Mick Dewey and the SEKU Association?

Well, I have know Mick for over 17 years now, first as a rival and competitor, then as a fellow international. During this time we became close friends. I always admired his ability and attitude towards karate and the way he taught. On some occasions he was kind enough to ask me to teach at his dojo in Portsmouth, which was and still is a pleasure as it is such a good dojo. At about the same time I met Mick, I also came to know the other main cog in the SEKU Association, Mervyn O’Donnell, a man who as well as being a fine karateka and instructor, has organisation abilities second to none. Together with the support of some good friends, in dojos they were teaching at, they started SEKU. After about a year they asked if I would like to be involved and knowing them both, as I have said, and what they were trying to achieve, I jumped at the chance and I am very grateful and now I am the Technical Director.

Q: Everyone is frightened of talking about politics in karate but we all know that this is a massive dividing problem which only can be sorted out amongst the big Associations. What are your views on this subject?

That’s some question!! Well, I think people are not so much frightened about talking politics, it’s just we could talk here all day and still be back where we started, so people don’t want to bother any more. You see they have heard it all before. Basically I think it’s down to personalities and ego’s as much as any real ideal they have about karate-do. There will always be divisions no matter what happens, as long as they put their gi on and train sincerely each day, then hopefully through karate-do they will find the right way.

Q: How do you feel about karate becoming an Olympic Sport?

Oh! Another biggie! Well personally I wouldn’t like it. Not because I think karate would not be good for the Olympics or the Olympics good for karate. I think it would force a big division, it would make the sport orientated people more so and the traditionalists more so. That’s not good in my view, you see I think both extremes are wrong.

Q: Do you have any goals or ambitions in your karate life?

Yes, many, it’s a never ending battle to improve and understand and also to help the SEKU develop. I just try hard and take one day at a time.

Q: I know you have a club in Brighton. How is this after traveling around so much in the last few years?

I still do a great deal of travelling but it is nice to know that at least three times a week, I know where I am. Brighton Shotokan Karate-do is the name of the dojo. It’s Monday’s, Wednesday’s and Friday’s. The classes are structured for three levels, beginner, intermediate and advanced and we practice Shotokan Karate (ha ha)… that’s a good plug eh! No, seriously the club has been established for over eleven years before I took over and was run by four very capable karateka, Will Davies, Paul Bonett, Greig Wedekind and John Cave, all 3rd Dan. Carol Combes was secretary so you can imagine with that kind of leadership it was quite a powerful dojo. They heard I was planning to move south from London to be nearer my SEKU workload.
They very kindly offered to pass the dojo over to me if I moved to the area and taught them, which I was pleased to do.

Q: I get so many letters saying that Shotokan is the most popular and best style etc. After studying and teaching Shotokan karate for so long, what do you honestly think of our style?

Karateka are notoriously proud and biased. To some extent I am the same no matter how open minded I try to be. I think that really the style of karate is only as good as the individual. A good Shotokan karateka doesn’t make Shotokan good or a bad karateka make Shotokan bad. I think Shotokan had such a good start in this country with Japanese senseis so early on, compared to other styles, that over here at least we are very powerful.

Q: I was very impressed with the SEKU video which you feature in. Can you please tell us about this venture?

Well, Mick, Mervyn and myself are forever trying to make our students feel and understand the Kata, and video seems to be the new way to pass it on to as many people as possible, without seeing them. We just hope that people benefit a little from it.

Thank you for giving the interview Dave, and good luck for the future.